Although I've been speaking professionally for many years, presenting in TED-style was totally new to me. What I liked about the training, was the whole process of creating building the talk. But the best part of the training for me was the way Pauline helped me condense years and years of research into a 18 minute talk. The result was a talk in which I told three stories to get my message across. Pauline also taught me about all the different techniques you can use with PowerPoint. In my talk for example was morphing and between the stories I put a black slide to mark the transition.

During the trainingsessions I liked the way Pauline communicates. She gives feedback and is critical in a way that's helpful. She also showed me a new perspective and allowed me to think of creative ideas. At first I was unsure about only doing three stories in my talk. But I did it, and it worked the power of three.

The final result is that I now know how to better construct a PowerPointpresentation. How to deliver stories in a way that they are more conversational. During the afterparty a woman came up to me and asked: 'Did you script your whole talk?' And I said 'yes'. And she couldn't believe that I was doing the whole talk by heart. She said: 'I experienced the talk as a conversation of which I never believed was possible when speakers memorize their talk.' Another woman told me that she is asked to do a TEDtalk and that she was in doubt. But after my FRAUDtalk she was inspired and is convinced that she's going to do it. For me that was such a big compliment.

I would recommend this training not only for people in Europe, but also for speakers in the United States because you get such a different take on presenting. The way Pauline encouraged me to be creative helped me so much. That's what differentiates this training. 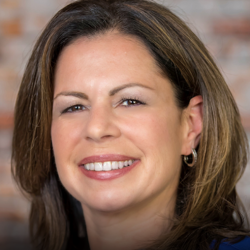